How Wine Tastings Have Gone Astray

I’ve thought for a long time that most wineries have become tourist traps. The wine matters less and less, the destination experience for the casual consumer is what pays the bills. Consumers who are serious about wine, are left in the lurch, because the winery – despite all the training, all the staff – really no longer gives a stuff about the product.

Any half-trained ‘sommelier’ can blind a normal consumer with jargon. Smile and nod. There is no point in arguing with their bullet points.

Is it any wonder that consumers are moving into other beverages?

I answered a question on Quora, mostly from memory the other day, and it led me to double check the differences between Club Sodas and Sparkling Waters. My contention is that sparkling water is generally a bottled mineral spring water, and therefore contains various trace minerals, but most usually sodium (Na) and calcium (Ca.) The most popular sparkling waters come through limestone and to my surprise actually can bubble to the surface carbonated.

I stayed briefly in an ex-monastery converted to hotel in Tuscany, that had two pipes in the courtyard, running at all times. The one on the right was still mineral water and the one on the left was sparkling. When I inquired the springs had been running since time immemorial, and likely were the reason the spot became ‘holy.’ They made no effort to bottle it, just let it run out of the well and back into the ground.

In any event here are two products labeled according to Canadian food laws. As you can see the one on the left has nothing but sodium and potassium and water in it, and the one on the right has a substantial amount of calcium.

Note that the Pelegrino has significantly lower sodium (25mg/750mls) when compared to the “low” sodium CanadaDry (45mg/330 mls.)

I probably need to add a category for the new designer waters – additional vitamins, and I expect somebody is adding minerals too, as they are a nutrient. 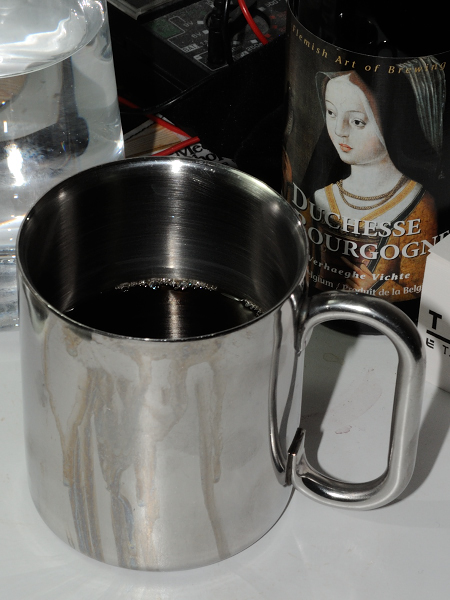 Okay, this may seem odd to put on a booze blog, but I have yet to meet a serious fan of the grain and grape to not also have an enormous affection for the greatest Arabic invention of all time: Coffee!

I’ve been roasting and grinding the stuff for almost 40 years. (Dear God! I’m older than the planets!) I make no claims to being the best coffee connoisseur in the world, but I have a better base knowledge of the stuff than average.

If you’re curious I make, almost exclusively, filtered coffee in a Melitta pot, hand ground via a Hario grinder. My bean of choice, purchased green, is Ethiopian Yrgacheffe. I’ve fooled around with other systems, notably the Chemex. The Melitta filters are easily available, and I like the notion of using unbleached paper.

I REALLY like hand grinding, mostly because I detest the whine of machine grinders first thing in the morning. Also – and you will either have to try this yourself or just assume I’m a (hand) crank – it tastes different and I think “better.” I used to use German hand grinders but they disappeared for a few years from the N. American market. I found the Hario about a year ago. I use the clear grinder with the vacuum base and can’t recommend it highly enough.

The biggest problem with hand grinding is you need a certain amount of wrist strength to hold the grinder still against the resistance of the beans. This is particularly a problem for smaller women, but the grinders still move in my (190 cm, 100 kg, wimpy) hands. The Hario clear has a vacuum base, which lets you grind one handed. Mind you, you’ll need a polished surface like a granite counter top, for the vacuum base to grip. (I use the enamel of the stove top.)

Also the Hario has replaceable parts though at this price I’ll likely just buy another when the burrs show signs of wear.

Anyway, whether you aspire to my middlebrow level of coffee making, or wish to go higher I wrote this post to share a blog I discovered.

Mr. Piotr Jezewski offers regular reviews, great insights including quantifiable measures. (And I think quant tasting is badly needed throughout the food and beverage industry.) The guy and his blog are brilliant! If you want to know about the ultimate cup of coffee, and the ultimate tools to take you there, check him out.

For the record, I’ve never met him, don’t know anything about him other than his posts and I doubt he has any idea I exist.

Ho Ho Ho! A drink to seasons past and seasons future

No Christmas Eve would be complete without a glass of real egg nog, not that horrid stuff you buy by the carton.

As I said on the air today, I make this for myself using half the sugar, and skim milk. Dial in the variables to suit yourself. Also shaved dark chocolate on top is a nice touch. As is Fee Bros. Mint Bitters.

A couple of great suggestions from callers

The “Low Cal” and singeton version.

And for the beer drinkers in the crowd, the Beer I had John drinking is Duchesse de Burgogne 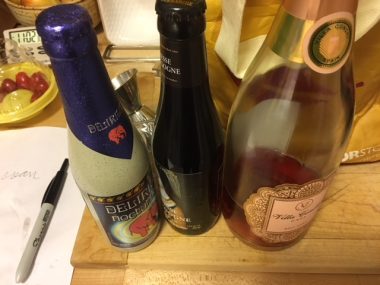 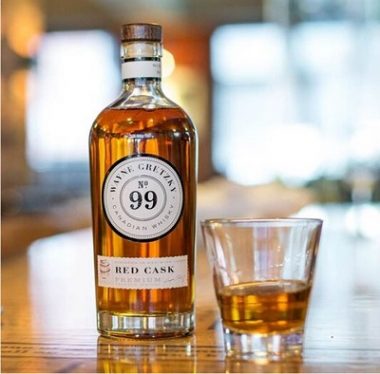 *****
CORRECTION: I previously said the wine was aged in red oak casks. I was wrong. There was some confusion over the casks, which are white oak, French, previously used to finish Gretzky’s Merlot, Cabernet Franc and Sauviginon.
*****

Gretzky has just launched a whisky. And I’m here to say, it’s a pretty good one. But it is also deeply interesting from a technical point of view.

Traditionally wine and whisky are aged in white oak – Quercus Alba in America, Q. robur primarily in France – casks, charred to a greater or lesser degree on the inside. American made barrels are flat sawn, exposing more grain and therefore more of the lactones in the wood to the spirit or wine so stored. French oak is split. Some Spanish coopers import Q. Alba logs and split them for use in Spain.

The costs of inventory to age whisky are staggering. Wine Barriques currently cost about $1000 each. They hold 225 litres more or less. About 12-100 MILLION bottles of scotch are sold annually. There are an estimated 20 million barrels in storage at any given time. Distillers are removing age statements as quickly as they can to cut costs.

Recently researchers have discovered a method involving temperature and UV light which they claim can age whisky in a matter of months, maybe days. Micro-distillers in Canada are speculating that the massive temperature swings on the prairies (about 80 degrees C/176 F) will age whiskies here abnormally fast.

I tasted No. 99 alongside a Gibson’s Finest yesterday. The whisky was notably darker in colour, likely due to the oaking. The bouquet did have some ethyl acetate aromas that cleared off fast, a couple of seconds in the glass. It was surprisingly smooth. with a nice finish.

It would make a nice base for your favourite Canadian cocktail. I expect it will work well in a sweet Manhattan. Maybe even in a dry Manhattan. Personally I’d drink it with a single cube, but I’m a horrid sinner who grew up in a curling rink, so pay no attention to my tastes.

I think Gretz may finally have found his niche with this whisky. Retail is about $45. Certainly low enough to make it worth a try for every whisky aficionado. I’d be curious to try a No 99 that is older, maybe 10 years or so…