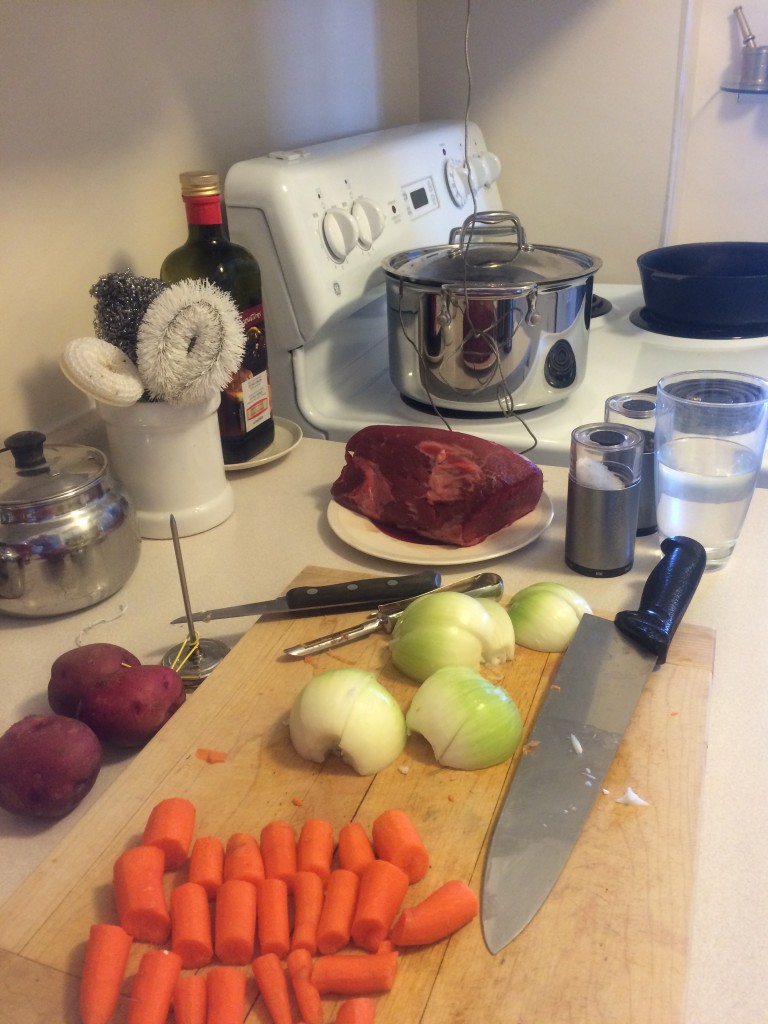 This was an experiment in sous vide cooking, which assumed I didn’t want to spend more money and space on new cooking equipment like a home sous-vide unit.

Sous-vide for those of you new to the concept is cooking very low and very slow. The issue of slowness will vary from item to item. Ideally you seal the food in a heavy vacuum bag, place it in water between 130 and 150F (55-65C) depending on the degree of doneness sought.

The result has a much more jelly like texture, closer to raw meat. It also tends to be moist and tasty.

Above you can see everything that went into my effort – eye of round roast, and some vegetables. The pot in the background is filled with water at about 140F, on a 6 inch electric burner.

I have found in the past that the small elements of an electric range when set to minimum work beautifully as slow cookers and it was that which inspired this attempt. 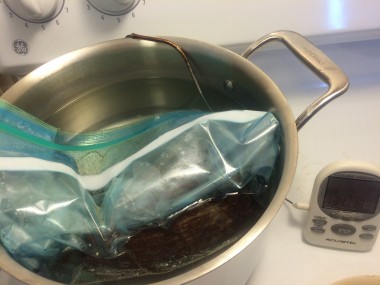 I browned the roast in a cast iron frying pan,after rubbing salt and pepper into the skin. This is unnecessary except for asthetics. If you don’t mind your meat looking slightly greyish then don’t worry about it.

I then stirred the onions and carrots into the pan, coating them with jus and remaining olive oil, covered them and put them in a 300 degree oven for two hours. The roast, once cool enough for me to handle – about five minutes – was popped into a ziploc bag and then into the water in the stewpot. The water was at about 140F and burner turned up to two. Over the next 15 minutes the temperature slowly dropped to about 130, and I reduced the heat to minimum.

For the next three hours I let the roast sit in water between 130 and 135. When the temperature of the water hit 135 I turned the burner off. When the temperature hit 130 I turned it on. I suspect just removing the lid could have got rid of this fiddling. (Obviously a sous-vide cooker removes the fiddly part.)

At the two hour mark I pulled the roast and stuck a thermometer in it: it was at 127. I also measured it again at the two and a half hour mark (131). I decided I wanted it a little more done as I wasn’t sure about the hygiene issue of half cooked and eventually pulled it from the water at 137. 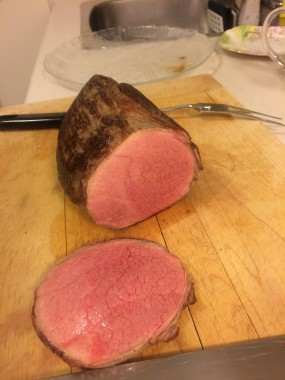 At the two hour mark I turned the oven up to 400 added the potatoes, and left the veg in the frying pan in the oven. They turned to brown carmelized mush that didn’t look great but was extrememly tasty.

As you can see it was beautifully done and had a great texture. I normally don’t roast eye of round because it is too dry. But this way it made both a fine meal and the perfect cold roast beef sandwiches for a week.