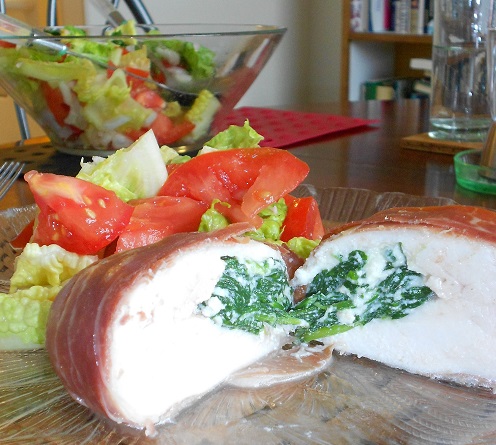 @JehanCanCook on Twitter posted a shot of a stuffed chicken breast and it inspired me to try.

You can stuff breasts with any number of things. For example most people have had chicken cordon bleu, a regular in the winter around here.

There are a couple of tricks.
– You need to flatten the breast a fair amount. As you can see by the picture I needed to flatten these breasts more.
– The amount of stuffing is quite small. I used less than half a cup of ricotta and still had more than half left after doing two breasts.
– The white meat will come out of the oven quite pale, unless you bread the breasts, or in this case hide them behind Parma Ham. Below is a very small picture of a tender cooked in the oven beside the breasts to give you an idea of what the meat looks like done. I’ve overdone any number of chicken cordonbleu because of their colour.
– When flattening breasts it works best if you beat on the bone side of the breast. (i.e. Place the breast skin-side down on the board, then whack away.)

The recipe is very simple.

Preheat a 10 inch skillet. cover the bottom with olive oil. Add the spinach and stir until it is dark green and quite soft. Remove the spinach to a plate and let it cool a bit. (An option here is to juice half a lemon over the spinach when half cooked and stir in the zest from the same half lemon. Most of the juice will evaporate in the skillet. Some people prefer the creamy salty taste of the ricotta. I rather like it cut a bit with lemon.)

Stir the ricotta and parmesan together. When the spinach has cooled enough to handle, chop it roughly. (You can do this before cooking but I find sautéing chopped spinach a pain.) Stir the spinach into the ricotta mix. The mix should look more like spinach than cheese. Only salt and pepper to taste after mixing in the spinach as ricotta like most cheese is quite salty.

Beat the breasts till about a quarter of an inch thick. This will get a little messy around the thick bit. I find a meat hammer or a good carver’s mallet works best.

Spread the spinach mixture a couple of millimetres thick on the hammered (i.e. not the glossy skin side) of the breast. Roll. Then roll a slice of Parma ham around the outside. I used 2 slices per half breast to completely encase the roll.

Bake in a 325 degree oven for 20 minutes. Serve. Jehan’s picture used fresh salad greens and cherry tomatoes. I made a tossed salad with tomato, sweet onion, and a romaine heart. I would recommend a nice crisp trebbiano or Soave as accompaniment. A cava like Freixenet would work beautifully.

Total meal prep time from start to pulling from the oven, 30 to 45 minutes depending on your skill level. Difficulty level: Beginner. 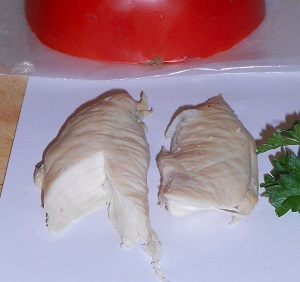 I included the tomato and sprig of parsley and the cutting board (unfinished maple, well scrubbed) to give you a sense of the colour balance. The flash tends to make things a little blue; Canadian chicken is much ‘bluer’ than American, as Canadians feed their chicken grain, and Americans use corn, yellowing the chicken. The white backdrop is just copier paper, 92 brightness. (The tomato is on waxed paper.)