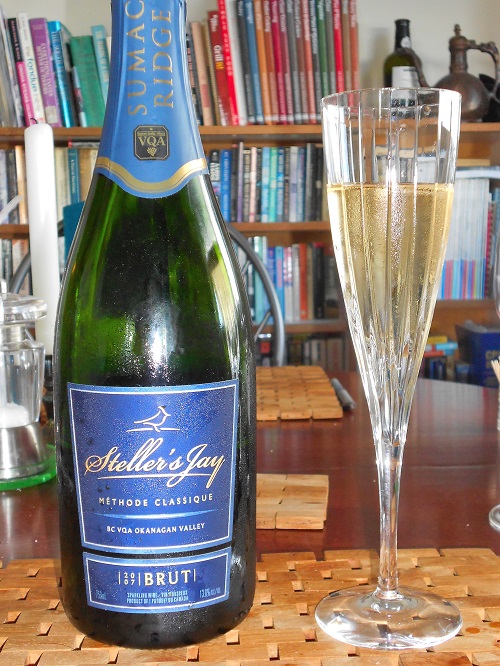 We had a solstice party last night, and as is our wont opened a bottle of bubbly. I’ve had this bottle of Stellar’s Jay the Pinot Blanc sparkling wine from Sumac Ridge for a few years now. I’m pretty sure I picked it up around ’09 from the winery. Anyway, it’s a 2007 vintage.

For those of you interested in laying down (AKA cellaring, aging) wine, Champagne should be one of your picks. The Brits adore old bubbly and typically keep the vintage stuff around for 15 to 30 years. I’m more on the French side of life preferring it younger but around 15 years it does get interesting.

Anyway, most of the non-Champagne people make no real claims about aging, usually because they just don’t have enough experience with their wine when old.

The six year mark with this bottle would say to me 15 is a very reasonable goal for Stellar’s Jay and I wouldn’t be surprised if it were quite nice at age 30. Modern hygiene during vinification and on the bottling line, and closures likely mean wines will age more slowly (i.e. change in the bottle). If you’re interested in building a cellar and like Stellar’s Jay (and who doesn’t like the stuff?) should consider this a candidate for the back rack in the basement.