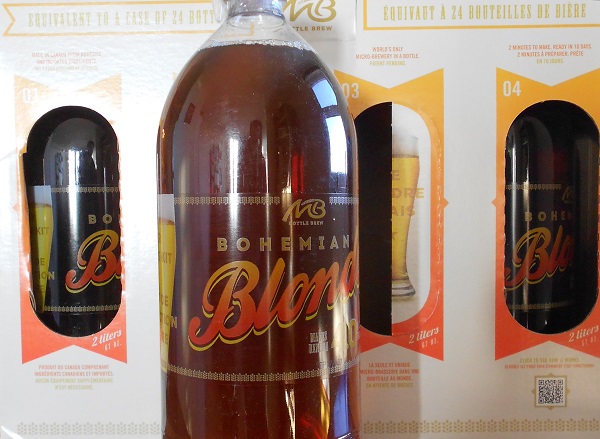 For those of you who saw Jeremy Dodge brew beer on air, it really is that easy with the MB Beer Kit. But how does it taste? Well, I before I committed to do the segment I made two batches and tried them. I also tried them on serious beer drinkers and – most importantly – on a couple of serious Beer Heads, Real Ale guys (Thank you, @SaskGatz). When they gave it their analysis and seal of approval I knew I was on to something.

The kit comes with four X 2 litre bottles of wort with a small vial of yeast attached to the bottle. You unscrew the cap; dump in the yeast; screw on the cap with pressure relief valve; wait ten days.

There are two flavours, Cerveza, a blonde Mexican beer, and Bohemian Blonde, a german lager. The Cerveza is aimed at the Corona drinking, mainstream beer crowd. The Bohemian is aimed at folks dabbling in the next rung up the ladder, German beers with more flavour.

In Saskatoon the kits are available at:
– The Circle & Avenue C Coop
– World of Water on 51st
– 8th Street Coop
– And of course online from MBBottleBrew.com

And also at coops around the province. Check the MBBottleBrew Link above for locations near you.