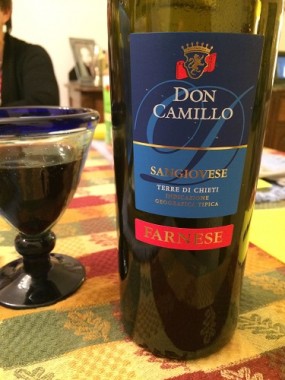 I had an interesting wine this week. Three days ago I opened a Don Camillo Sangiovese (from Farnese). I had one glass and told Sairey,”I’m opening something better.” The wine wasn’t bad, as in corked, TCA taint et al., just had a sort of sickly sweet vanilla-caramel tongue coating to it. I left the wine on the counter as I was making a tomato sauce the next night and reckoned it would be good enough for that.

When I tasted it the following evening, the vanilla had cleared off and left a solid backbone of real sangiovese behind it. (And yes I do taste wine before using it when cooking. I have been known to not use $20 wine in my cooking if I think it has flaws.) I was impressed.

To double check I opened a second bottle last night and it too had that syrupy attack. However lacking a decanter I gave the remainder of the bottle a whirl in the blender a la Nathan Myhrvold. And this worked perfectly. Wine restored to drinkable state.

For decades people have used decanters, usually to allow wine to air or oxidize. This works really well with hard tannin wines. Apparently it works well also with over-built and slightly over-ripe wines. It won’t work if there is no spine behind the wine (most zinfandel). Myhrvold recommends a blender for all reds, claiming the oxidation increases the flavour profiles for good or ill.

A decanter is more civilized, but tossing a dinner guest’s cru burgundy into the osterizer is also good for a laugh.

Do I recommend the wine? yes with the decanting reservation. It’s an interesting blend of very ripe grapes and traditional wine making.