I recently bought a bottle of Uncle Val’s Botanical Gin. For those of you not paying attention, artisan small batch gins have been springing up everywhere. Pricing ranges from normal-ish (~$30) to absurd ($100+). Aviation gin from Oregon has a huge following in America, as do various other small batch gins. In fact I have a friend in the UK who rather bashfully describes himself these days as “something of a gin snob.”

Truthfully I always seem to come back to Tanqueray which is probably a form of comfort food from my youth as much as any other rational reason. But if you like to experiment you should make a point of buying and trying any and all such gins you come across. Although there are some that for me, once was enough, I have yet to have one that resulted in me pushing my glass away.

There are a couple of things you need to know. Firstly the flavours in vermouth vary widely and if you’re a dry martini fan you need to have at least a couple of vermouths on hand and do an A/B/C comparison before rejecting a gin as a poor martini gin.

Secondly if you are a G&T fan the tonic probably matters as much or more than the gin, given it constitutes at least half the volume and likely more of your drink.

There is something delightfully decadent about a G&T, a drink that conjures up rubber plantations and seamy Somerset Maugham plots. The men and women who ran the rubber plantations were gods! They took malaria in their stride, keeping it at bay with daily doses of quinine diluted in gin. (Apparently the DTs were just another repetitive strain injury associated with the job.) This medicine eventually evolved into the modern G&T, a great summer drink especially when the going gets sticky: I drink them all year around. 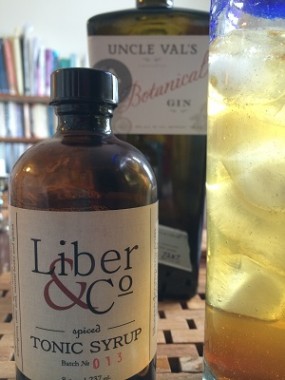 There are a few high end tonics out there, my preference being Q (pictured above) or Fentimans. If you are really adventuresome there are some tonic syrups out there that are exceptionally tasty like Tomr’s and Liber . These are wonderful but they darken the pure G&T and I must confess to being an effete aesthete and preferring the look of that perfectly clear G&T. (And if you like Tequila be sure to try the Liber Grapefruit Shrub with your fave tequila. It is also great with gin.) If you worry about your carbon footprint, the concentrates like Tomr’s and Liber are clearly the way to go as the concentrate saves shipping endless amounts of water around the country. (If you’re a soda stream person, you must must must keep a bottle of these handy.)

If you don’t feel like searching out, or can’t find a micro-distillery product like Saskatoon’s own LB Distillers or Aviation, keep your eyes peeled for Tanqueray Malacca which is an extraordinary gin although not common in Canada. Also Citadelle, another French gin is first rate. Again though you’ll want to do an ABC test with vermouths to pick the right one for a martini. Or just stay steamy and decadent and have a gin and tonic.

At right a picture of a Liber and Uncle Val’s G&T. I have to admit I rather like this combo despite the colouring.

A lifetime of craft, care and passion, distilled into an expression like no other.