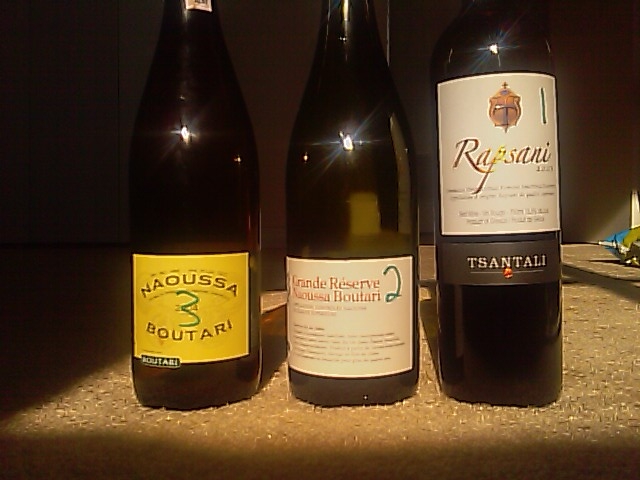 I was feeling all zorba-esque this week, so I bought three Greek wines to try.

If you’re thinking retsina, you probably have bad memories of a party long long ago involving inappropriate behaviour.

No one who actually likes wine, likes retsina. Near as I can tell, the popularity of retsina stems from a) smoking so much your tastebuds are shot, and b) having incredibly bad wine to start with that can only be improved by doctoring.

However Greece has also made real wine for a long time, usually involving grapes none of us have heard about. The Greeks probably learned their viticulture from the Persians, Cretians, and maybe the Egyptians. They knew how to make vineyards we’d recognize; using spacing, pruning and training techniques still in use today.

However Greece fell on hard times in the last couple of hundred years, and there were maybe a dozen decent wines in the country in the ’80s.

The three I picked up were modern attempts at fine wine. Boutari is one of the pioneers of the venture to make real wine, and you see above his Grand Reserve and his table wine. Both have some tanning in the glass, the table wine more so. I suspect this one is aimed at the local market where oxidized wines ruled until maybe the last ten years.

The grapes used are Xinomavro (roughly translated as “acidic black”) an ancient varietal. It reminds me of nebbiolo having a light taste when first poured with bright acid. It opens up in the glass to a prounounced floral characteristic.

Both are worth watching for and neither are expensive. I haven’t drunk a lot of Grecian wine but I’ve never had a bad body of Boutari. Most of his wines come from the Naoussa region, which is also quite reliable.

The last wine is a Rapsani region, the foot of Mt. Olympus. None of these wines have really wowed me, but this one is nice. Less floral, more crimson than Boutari’s wines, it still had nice acid and good tannin. If you’re a Pinot Noir drinker, or a Beaujolais Cru drinker I think you might find this wine interesting.

Finally if you like dessert wine, watch for Samos Muskat. It’s an orange muscat from the island of Samos. An absolutely stunning deal in a great dessert wine.

We drank them with aubergine (AKA egg plant) casserole, and pork chops with rosemary, olives, capers and feta. You can’t go much more Greek than that. Recipe below