I found the original of this recipe in the WSJ. I immediately modified it to suit me. It scales easily from one to 8 persons. It took me, including prep time less than half an hour. If you did it for just one, less again.

This is modified recipe from Betsy Andrews. The original was prunes and bacon. I found the bacon overpowering and I’m not a huge prunes fan, preferring the brighter flavour of apricots. Dates could be used instead of either. Also, this looks like a variation on a Spanish or Southern Italian recipe to me, in which case they likely used a sour or blood orange. I used a Californian Navel. Feel free to experiment by adding the juice of a quarter of lemon or more.

1. Bring a large pot of salted water to a boil. Add spaghetti and cook until al dente. Drain, reserving ½ cup cooking water. Bringing the water to the boil takes longer than anything else in this recipe.

2. Heat oil in a large skillet over medium heat. Add bacon and cook until crisp. Drain on paper towel. When cool, crumble it. (I do this with my hands but some people use knives etc.)

3. Add red onion (or whatever onion is handy; I usually use yellow cooking onion) and cook until soft but not browned, about 5 minutes. Add chicken stock, butter, red pepper flakes, rosemary and orange zest and juice. Reduce heat to medium-low and cook until sauce is slightly reduced, 5ish minutes.

4. Add cooked spaghetti, 4 tablespoons cooking water (Optional. If you like your sauces runnier than I like mine you should.) and Parmesan to sauce. Toss to coat. Stir in apricots and chives and bacon. Season with salt and pepper if desired. (I don’t think either are necessary. There’s a ton of salt in the bacon and cheese and my extra chili flakes cover off the pepper.) To serve, drizzle with olive oil (also not really necessary.) and Parmesan (personal taste.)

I served it with a Santa Margherita Pinot Grigio but it was overpowered. So I opened a Petra Kir-Yianni which worked beautifully. You should be fine with a Sauvignon Blanc or Chardonnay. Next time I’ll try a Viognier. 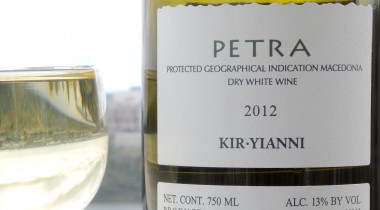