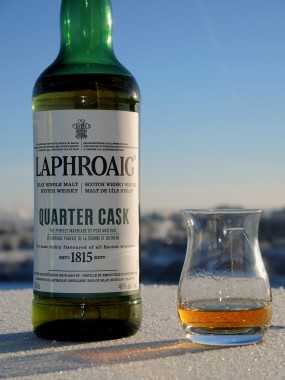 I recently tried a bottle of Laphroaig Quarter Cask. It struck me as strange in that it had no date statement, as is usual in single malts. I guessed that the use of a smaller volume cask resulted in faster aging. Here’s what the brand manager responded.

If you’re a scotch drinker, and somebody who chases the big number (18+) scotches you need to read this as it may change your viewpoint.

I hope you are well.

I was able to get in touch with Laphroaig North American Brand Ambassador Simon Brooking to have your Laphroaig Quarter Cask questions answered.

Please see below and confirm whether or not you have any further questions. Thank you!

Here is your original question:
“What is going on with the lack of aging for the Quarter Cask? Given that Laphroaig gives the age of their other whiskies; and given that this is normal even in blended scotch; why aren’t they disclosing that info for the Quarter Cask (as using smaller barrels exposes the spirit to more oaking and therefore will accelerate the “aging” process?”).”

Thanks for your interest in the aging process of Laphroaig .
As you point out Laphroaig Quarter Cask does not include an age statement (NAS). The NAS bottling is an industry wide trend to deal with the popularity and growing demand for single malt Scotches. In order to explain NAS whiskies, it is important to understand bottling whiskies with age statements.

According to the law, the age on a bottle of single malt Scotch is the age of the youngest whiskies that have gone into the bottling. For example, Laphroaig 10 Year as well as it being the No. 1 selling Islay single malt, Laphroaig 10 Year is a marriage of 10 yr, 11 yr, 12 yr and perhaps 13 yr old Laphroaig whisky. The century old tradition of marrying different barrels from different years is done to maintain the consistency of flavour.

As you know, aging in wood is not an exact science. It is very difficult to maintain consistency bottling from single barrel to single barrel . That ephemeral element is the beauty and challenge with single malt Scotches. Unless the label states the bottling is a “Single Cask” or “Single Barrel” , all single malts are a marriage (dare I say – a blend?) of those different years. They are technically not Blended Scotches because Blended Scotches are a blend of different single malt barley whiskies from different distilleries plus a neutral grain spirit.

Laphroaig Quarter Casks are a marriage of 5-11 year old Laphroaig in 200 ltr Maker’s Mark bourbon barrels . All the different aged whiskies are then married and then the liquid is put into 125 ltr “quarter casks” for up to an additional 8 months. The smaller quarter casks create more contact with wood to whisky so you get an oakier quality to the Laphraoig and not as smoky. If we put the age statement on the Laphroaig Quarter Cask we would have to call it a 5 Year Old! The difference is this – we are not bottling to a year we are bottling to a flavour profile which is exactly how aged single malt Scotches are bottled today as well.

Also, Laphroaig Quarter Cask is not new. It has been in the market almost 10 years now and is our second biggest selling expression. One of our newer expressions is Laphroaig Triple Wood. It is an extension of Quarter Cask. After the whisky has spent those months in the quarter casks all the whisky is married and the put into an oloroso sherry cask for an additional 2 years. Laphroaig Triple Wood adds elements of sherry sweetness, dried fruits, apricots and plums etc..

My recommendation is to try the whiskies…(all of them) to better understand the unique flavours of each bottling and find the one that’s right for you.

All the best,
Simon

The Lit Night Club, where the brutal murder of Hodan Hashi, was facilitated has changed its name to Hibotan Night Club. we are investigating ownership and more.
#JusticeForHodanHashi #Saskatoon #Saskatchewan