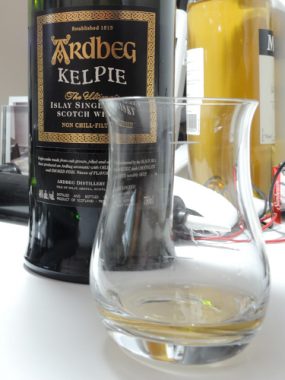 Here’s the latest limited release from Ardbeg a thoroughly modern Scotch for the New World Order.

Firstly, no age statement. Judging by the pale colour of the whisky I assume it is between 6 and 10 years. Distilleries are increasingly edging away from the traditional statement of age on the bottles. This if you haven’t been paying attention has been going on for at least a decade. It is driven mostly by a need to keep whisky in the distribution pipeline. The stuff is now so universally popular the production is not fast enough to support ten years in a barrel.

Secondly, the choice of barrels. This is the first whisky I’ve sipped, which to my knowledge hasn’t seen time in a used Bourbon barrel, the traditional aging vessel. The reasons are the same as the last paragraph. Cooperages in the US are hard pressed to keep up with the demand from bourbon distilleries, who in their turn are still dwarfed by the massive needs of say a Glenlivet or Johnnie Walker.

Instead the barrels are from the Circassian Hill country of the Adghye Republic. There is some back story to the oaks involved here which I haven’t tracked down yet. They may be particularly tight ringed old oaks, but I don’t know. In any event they’re Q. robur, the species made famous by the French in wine barrels.

Okay so what does it taste like? The nose is full of seaweed, iodine and smoke meats? Say what? There is a definite aroma of smoked or roasted or barbecued meat there. The box claims bacon, which I think is a bit off, but over to you for comment. I found the palate to be peaty, full of the sea and surprisingly herbaceous. Definite chocolate/earth there, with some fruits. A surprisingly delicate whisky given the powerful peaty nose. 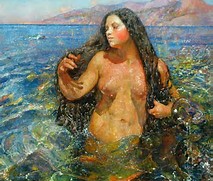 And for the nerds in the audience, a Kelpie isn’t an Australian sheep dog but a sea monster (also a fresh water monster, but in Scotland that difference can be slight.) It usually had the front of a horse and the rear of a sturgeon. Sometimes the horse was a bull. Supposedly the creatures could take on the shape of a human to lure you to your watery end. Their give away was hair tangled with seaweed. The pre-Raphelites preferred painting nubile young women (and who can blame them?), and gave Kelpie something of a siren spin.