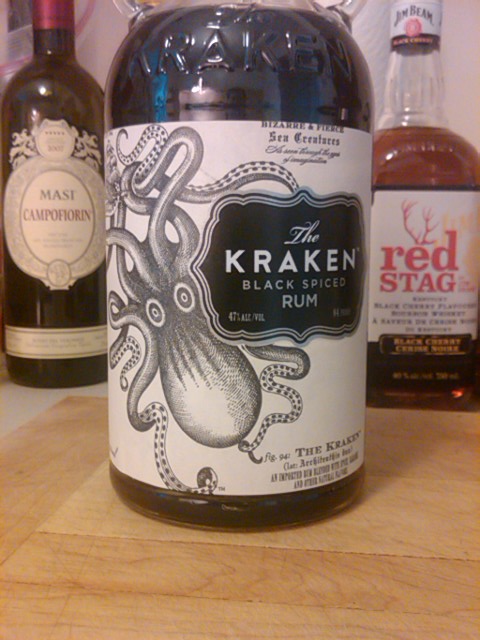 I’m told the most popular drink of the moment is Captain Morgan Spiced Rum. I’m not much impressed by this drink – an amber rum sweetened with a lot of vanilla. There are huge numbers of competitors leaping into the market including the Kraken pictured at right. (In the background you can see a new ‘spiced’ bourbon from Jim Bean.)

The Kraken is closer to a rum than Cap Morgan, and will accordingly appeal more to those drinkers. The spicing is ginger, vanilla, nutmeg, cloves, allspice, and a few other things I can’t identify. Maybe a citrus zest.

Almost all of the cocktails using spiced rum are horrifically sweet, usually involving blue curacao, coke or some other pop, and then a sweet juice like pineapple or orange.

If you’re going to go down this route why not make your own spiced rum? There’s nothing easier than infusing a liquor with spices.

Here’s my first kick at the cat.
3/4 bottle of dark rum
1 vanilla bean opened
4 cloves
10 whole black peppercorns
2 slices fresh ginger (1/8 thick and about an inch in diameter)
nutmeg to taste (I used a 1/4 of a nut, unground)
a slice of tangerine peel, white pith scraped off

Add the ingredients to the rum, cap and leave somewhere dark for a few days.

It doesn’t hurt to give the bottle a shake and taste it every couple of days. You may want to remove some ingredients if they seem to be dominating.

And if you want to try the cocktail I enjoyed with John G. here’s the recipe.

The Lit Night Club, where the brutal murder of Hodan Hashi, was facilitated has changed its name to Hibotan Night Club. we are investigating ownership and more.
#JusticeForHodanHashi #Saskatoon #Saskatchewan